Directed by David Bruckner, the horror film “The Ritual” has been getting some buzz amongst the horror community. The first time I personally heard anyone mention this film was on a podcast I listen to on a weekly basis called “Shockwaves“. So, a big shout out to them and I highly recommend that you give them a listen.

The film opens up with five friends drinking at a bar and aggressively talking about where they want to go on their next trip as a group – you know, the typical “bro getaway”. Shortly after, we cut to them walking through the streets continuing the same conversation. At this point the film establishes the main character, Luke, brilliantly played by Rafe Spall. 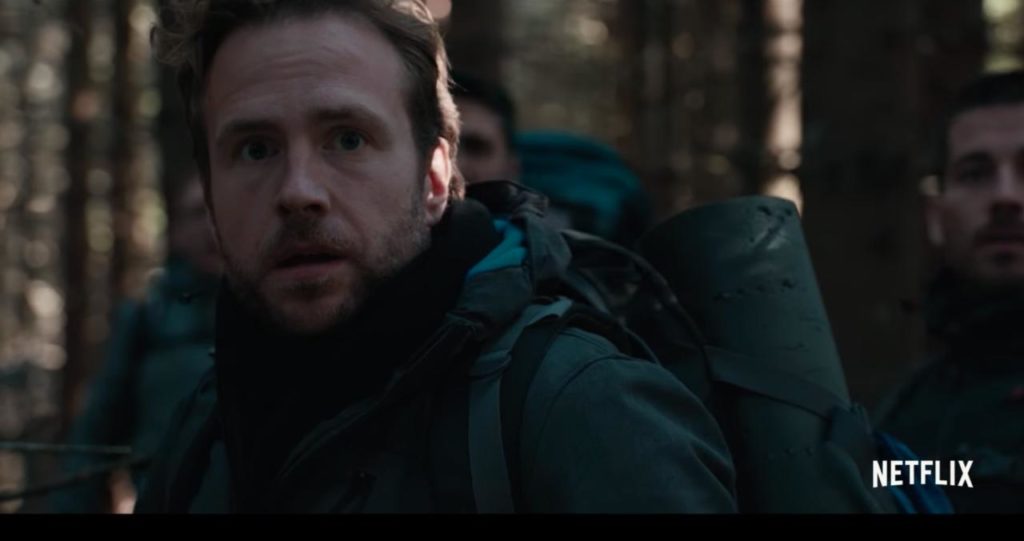 They set him up as the alcoholic and kind of the “I don’t give a shit about anything” type of guy and what comes next propels the whole film forward. Luke, makes it known that he wants to pick up more alcohol and all his other friends are against it. He then convinces, Robert, the “nice” guy of the bunch to go with him. They step into a liquor store not knowing that it was being robbed by two Junkies at that exact moment in time. Luke, quickly dashes behind one of the aisles while Robert was left in the dust to deal with the Junkies. To speed up the scene here, Robert ends up getting his face slashed by some sort of machete and ultimately dying. While Luke was hiding and was too much of a coward to interfere with the encounter which could of potentially saved Robert’s life.

Flash forward to 6 months after the event and we now have ourselves the start of the main story. Let me just say this from the get go – I actually loved this movie. I thought the film as a whole was smart, intriguing and at some points pretty terrifying. Now, was it scary? For me no but it was creepy for the most part. 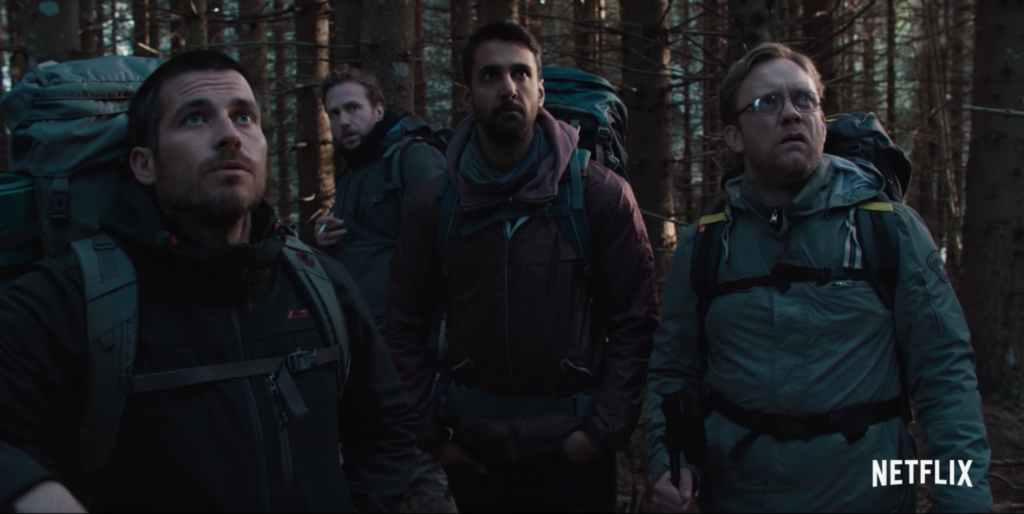 It plays out like a typical movie where a group of friends get lost in the woods and encounter some weird stuff. I like to call this the “Blair Witch Effect”, but unlike the The Blair Witch, we get to actually see the creature that’s killing them one by one. And it’s pretty damn awesome! Things start to really get in motion when they find a creepy cabin in the middle of the dense forest (of course they do, right?). As they inspect the house they discover some sort of shrine made up of branches and antlers. 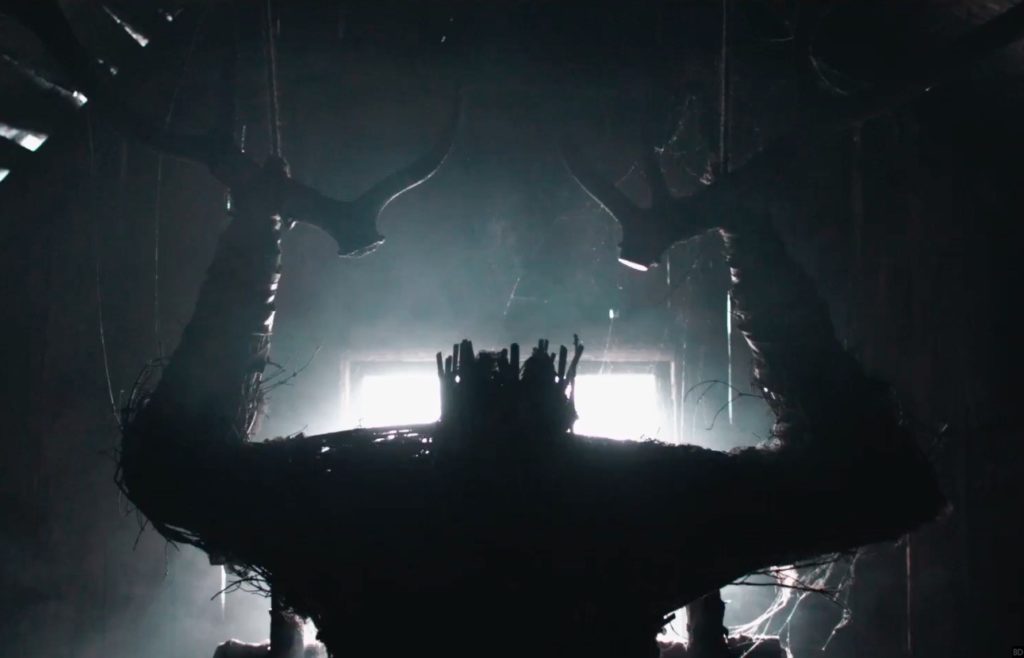 The next morning each of the four friends experience something horrific. Luke, revisits the night that Robert died and wakes up standing outside of the cabin with strange puncture wounds on his chest. Hutch, wakes up in a panic and urinated all over himself. Dom, has a nightmare in which he screams out his wife’s name non- stop. Then there’s Phil. What happens to Phil is the most creepiest. Luke, finds him upstairs naked and kneeling before the shrine.

They quickly bounce the hell out of there and try to find a way out of the woods. Sadly, things don’t go as planned and they become even more lost in the woods. I know, right?! Who would of thought that was going to happen to them. As night quickly approaches, they have to stop and setup their tents and sleep another night in the woods. In the middle of the night, Luke, hears large footsteps echoing around their campsite. A large shadow passes by his tent. Then a scream. Hutch, gets dragged out of his tent by something.

The next morning they go looking for Hutch and oh boy do they find him. His body is impaled to a tree with his torso split wide open vertically. Of course this sets everyone in a panic and they freak the hell out. Luke and Dom become the last of the four friends. With the creature chasing them through the woods, they stumble upon a path with torches burning on each side. They follow the row of torches to a cabin, but this time the cabin is not empty. It’s occupied by some scary looking villagers that look like they’re from 100 years prior.

Luke and Dom become captive and are held in an old and damp looking basement. They drag Dom out as a sacrifice but for some reason leave Luke. Remember, how he woke up from that dream with puncture wounds on his chest? Yeah, it actually holds some sort of meaning. One of the villagers explain that he was marked to kneel before what some may call the “Bastard Son Of Loki”. Yup! The Bastard Son of Loki! Crazy right?!

When the creature finally shows itself (because the whole film pretty much builds up to it) it’s pretty amazing. You first clearly see it when it kills Dom during the sacrifice and it impales him to a tree.

I’m going to try my best to describe the creature at this point. So, if you don’t want to know how it looks like, DON’T READ THIS PART. SCROLL DOWN . Here we go. First off, this creature is nothing like I’ve ever seen. It looks like a giant Elk with antlers but instead of a deer like face it has half a humanoid-like body with human hands attached to it with glowing eyes and a shroud over it’s face. It’s definitely something to look at. I was going to put an image of how it looks like below, but if you still plan on watching the movie I highly recommend not looking it up. Seeing how the creature looks like at the end is what makes this film really intriguing.

“The Ritual” as a whole was a great survival-esque horror movie that keeps you intrigued throughout the film for the most part. With that said, it does feel like it lags at some points. The film clocks in at about the standard 1hr 34mins and I feel like it could of shaved off at least 10mins and the film would still be good. The film does a great job of continuously tying in Luke’s guilt and how he blames himself for Robert’s death by showing flashbacks during clever times throughout the film. I know “The Ritual” is mainly about the core group of friends, but I would of loved a little more explanation on what the creature was and who exactly where the villagers and why they are there.

If you like creature horror movies with a dash of mythology then I highly recommend this film. I really didn’t think I was going to like this film as much as I did.