Have you ever asked yourself, “What if SAW was a courtroom drama?” Well American Hangman is the movie for you! American Hangman, had an early release date this year and luckily for us was recently added to Netflix for our viewing pleasure. 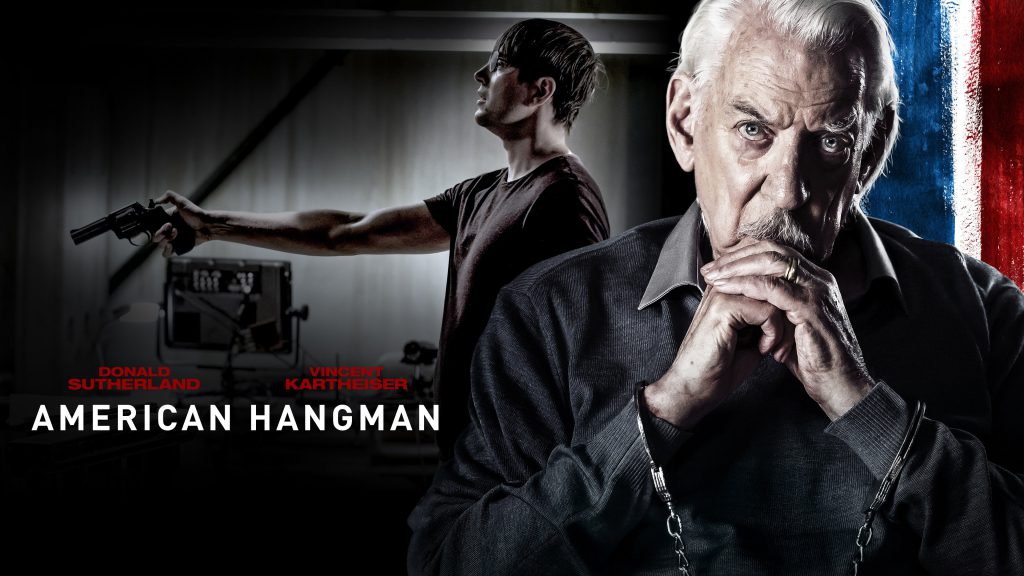 American Hangman, directed and written by Wilson Coneybeare (A Ted Named Gooby, Monster Warriors), in summary is about two men who have been kidnapped by psychopath and locked in a dark and grimy basement. The film stars Paul Braunstein (who ironically starred in the film Jigsaw in 2017), acting legend Donald Sutherland (Invasion Of The Body Snatchers, Hunger Games, Ad Astra) and Vincent Kartheiser (Mad Men). 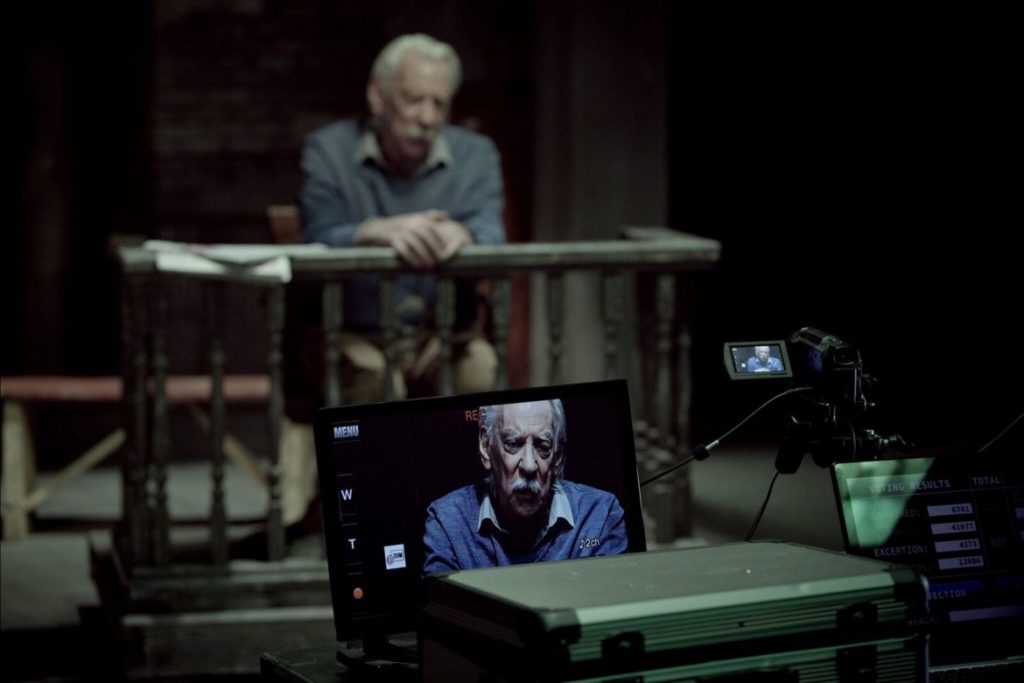 The movie follows the popular trend of single location horror films like Saw.

In the beginning, we’re quickly introduced to Judge Straight (Donald Sutherland) and Ron (Paul Braunstein), who awaken tied up and confused, with no obvious idea why they are there. Director/writer, Wilson Coneybeare, makes an interesting choice of introducing Henry David Cole (Vincent Kartheiser), early on – the brains behind the whole situation . So, the question of “who done it?” is thrown away but switches gears to “why?” which I feel takes a chunk out of another added mystery that could of enhanced the plot as the  story went on.

Henry David Cole, then sets up a live stream of the event on the internet for the public to see and even takes it a step further by implementing a well thought out voting system in which the people who are watching can vote in real time. Essentially, making the viewers jurors to this over the top court room case that’s about to unravel in front of their eyes. 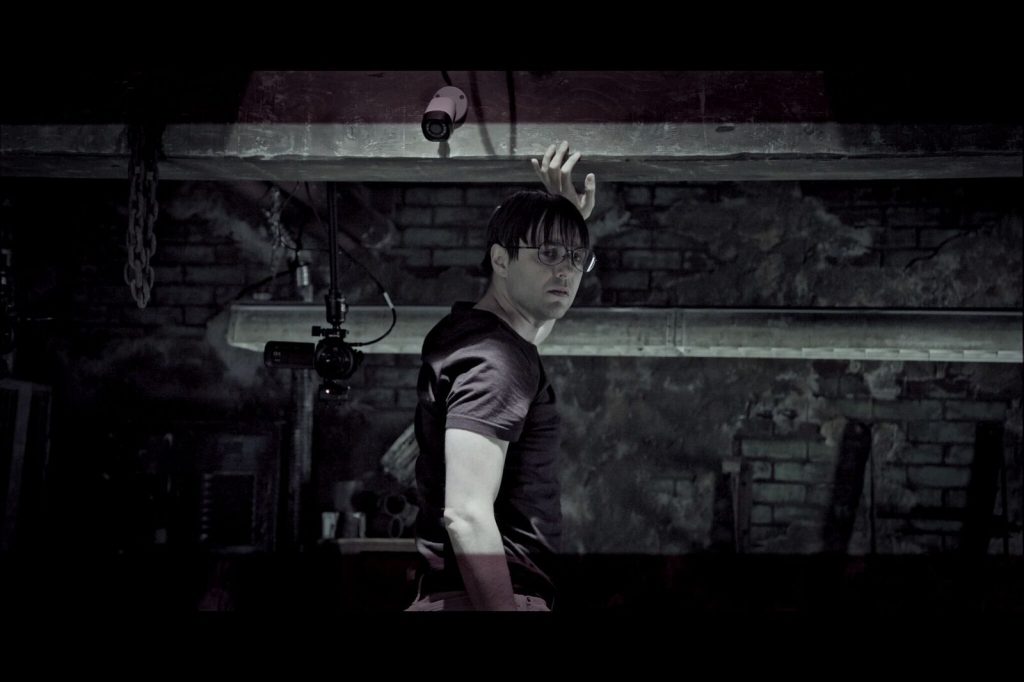 *SPOILERS BEYOND THIS POINT*

Starting off, the film does not do the character of Ron any justice whatsoever. Henry, clearly makes it known that Ron was basically captured just to be made an example of. After, some heavy exposition and banter with Judge Straight (Donald Sutherland), Henry kills Ron without too much hesitation, which made me wonder if Ron really needed to be in the film to begin with. It almost would of been better if Henry just used Judge Straight as the primary example since these two are clearly the main characters of the film. He could of simply just tortured or beaten up Judge Straight in front of the cameras and we would of all felt some sort of an emotional connection to Judge Straight. 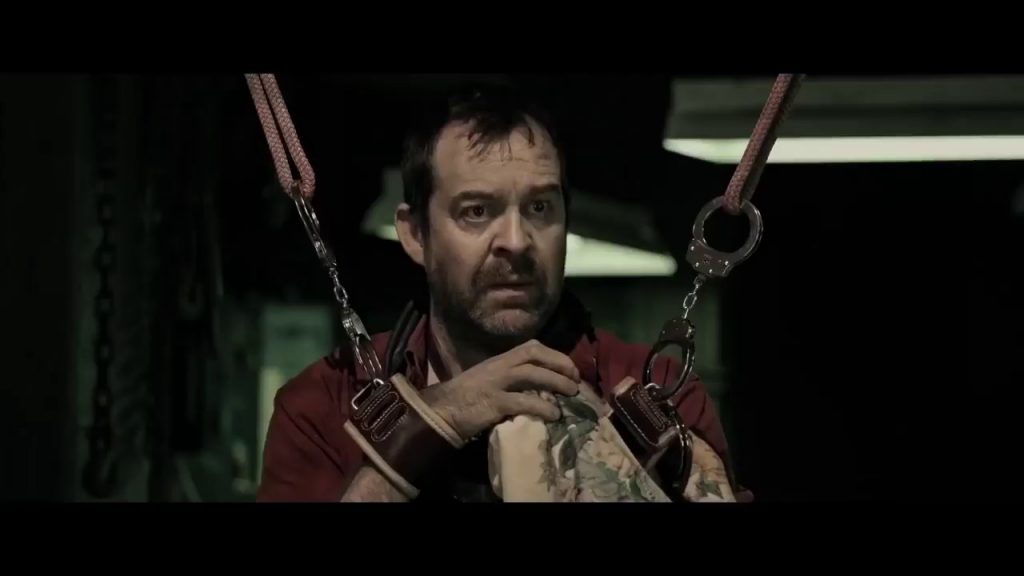 We do get glimpses of the Police trying to figure out the whole situation as it’s live streaming but in all honestly the cops felt almost nonexistent as they barely offered any help. The only major thing that was done by the police was contacting a female hacker named, Darnley, who tried to stop the voting polls and was trying to figure out the location of the basement. As we continuously cut back and forth from the precinct to the basement,  Henry David Cole, sets up a mock trial complete with a podium-esque prop for Judge Straight to sit behind as he pleads his case to all the curious viewers.

Judge Straight, struggles to make his case in a calm and stern manner as Henry starts to reveal the true reasoning behind his elaborate plan – Straight’s last case before his retirement.

He explains that Judge Straight wrongfully sentenced a man to death in connection to a murder of a teenage girl. Now, why is Henry so upset about this? Because…dun dun dun…Henry was actually the killer to that specific crime and obviously got away with it. This whole basement scheme is ultimately just a way to exploit how the justice system can be faulty.

The film ends in an almost “on the nose” way. They were able to pin point Henry’s location and deploy a SWAT team.

The SWAT team reaches the location and rushes in guns blazing as we see Henry pointing a gun at Judge Straight. In a series of fast cuts, they fire multiple rounds at Henry and Judge Straights location.

Once the smoke clears, the SWAT team investigate the bodies only to notice that Judge Straight has also been shot multiple times and is now holding the gun itself.

There you have it. A slap to the judicial system.

It’s a good concept with a slightly poor execution. Donald Sutherland, along with Paul Braunstein and Vincent Kartheiser all did an amazing job but their dialogue fell short at times because of some odd writing choices.

The movie itself is not as violent as you would expect but it does give you some cringe-worthy moments. American Hangman, does do a good job of trying something a little different in the realm of the “basement horror” genre but at the end ultimately fell a little short of what it could of been.