“I Kill Giants” is a film adaption of the popular graphic novel of the same name. The film stars: Madison Wolfe, Zoe Saldana, Imogen Poots and is directed by Anders Walter. I Kill Giants, follows Barbara, an odd teenager who wears bunny ears played by Madison Wolfe, who we see right from the get go lives a very hard and troubled life with her brother and sister. Her sister, Karen (Imogen Poots), struggles to find a job and keep food on the table while the brother sits around playing video games. Barbara makes it very clear that she’s different than everyone else – she kills giants! (hence the title). Now, once this is established, the entire film makes you question whether these Giants are real or not which becomes the lingering question in the back of your mind as you watch. 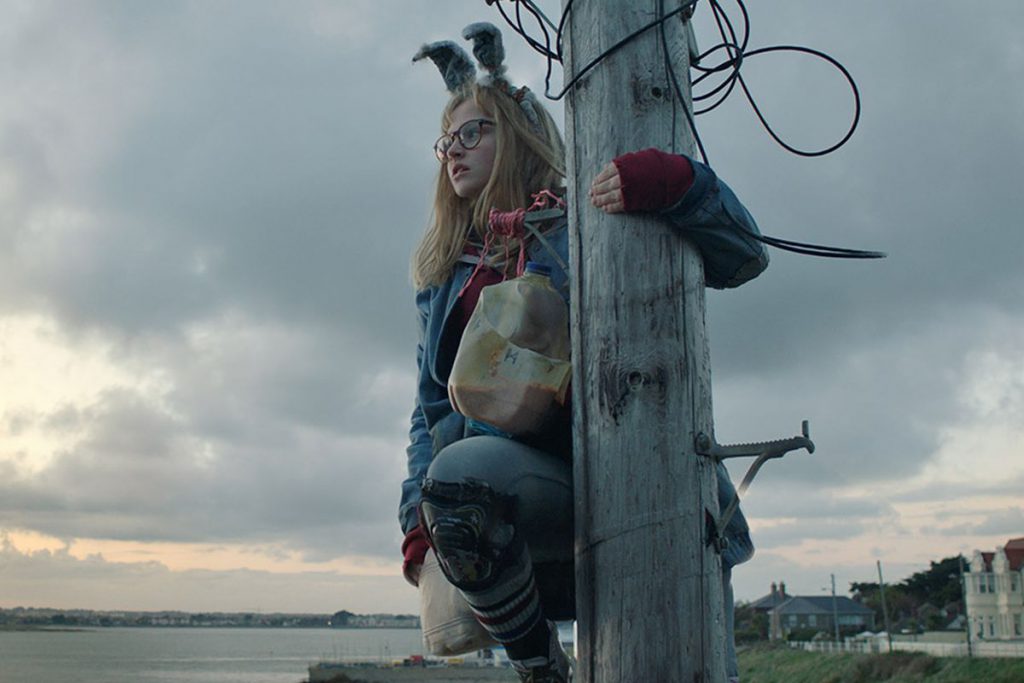 (Courtesy Of The Verge)

Okay, now I know I said in the last paragraph that the main basis of the whole film is to question if the Giants are real or not but in all honesty that’s just how I felt as I was watching the film. Looking at the film without the Giants, the overall picture is to give you a glimpse of Barbara’s life and how she views the world around her. The Giants themselves become just a plot device that movies the story forward. During, the introduction of Barbara, we truly see how serious she is about hunting down these Giants. One, of the things I love about this movie is we get to see her Giant killing arsenal – traps, weapons, bait and a mysterious weapon she keeps in her bag called “Coveleski” or “Giant Killer”. 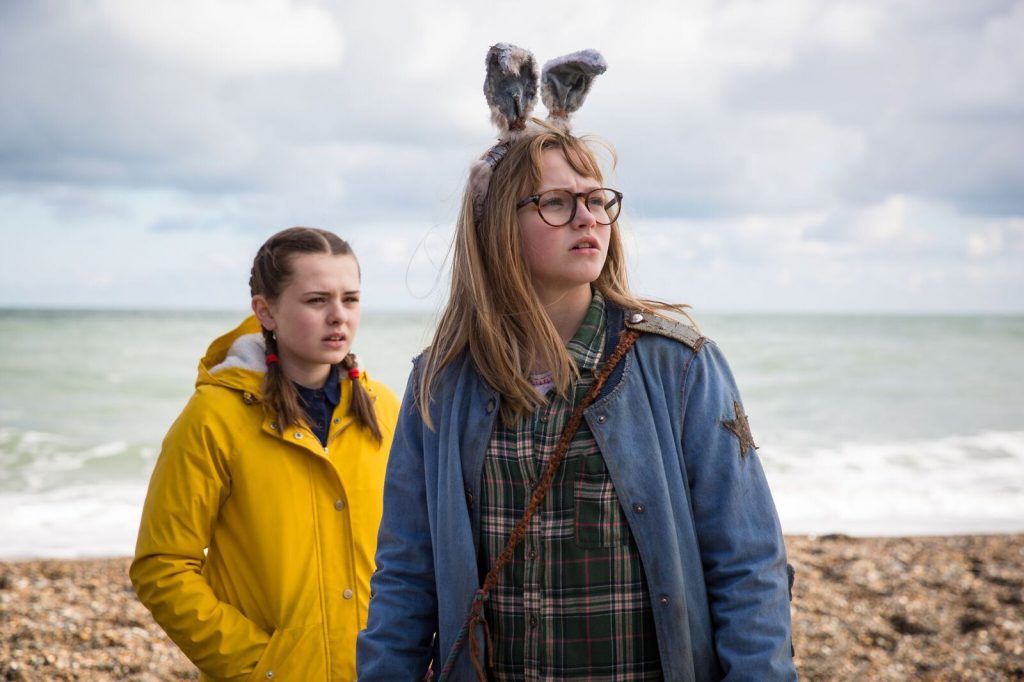 As the story progresses a looming question make’s it’s way in – where is the mother? I’ll obviously come back to that later on in the review.  Carrying on – We quickly get introduced to Sophia, a new student from Leeds who pushes herself into Barbara’s life. As this friendship builds we get even more insight on Barbara’s character through Sophia’s eyes. We follow them to school were we get to see Barbara’s day to day life and spoiler alert – it’s not that great. The thing about Barbara’s character that makes her so compelling is that she’s not your typical teenage girl that we see in those high school-esque movies. She has a tough exterior and gives zero F***s about how the other students feel about her which shows through various altercations she has with a bully named Taylor. She cares about one thing and one thing only – protecting her town from Giants. After, a small fight with the bully Taylor during lunch, Barbara get’s called to see the school counselor played by Zoe Saldana. 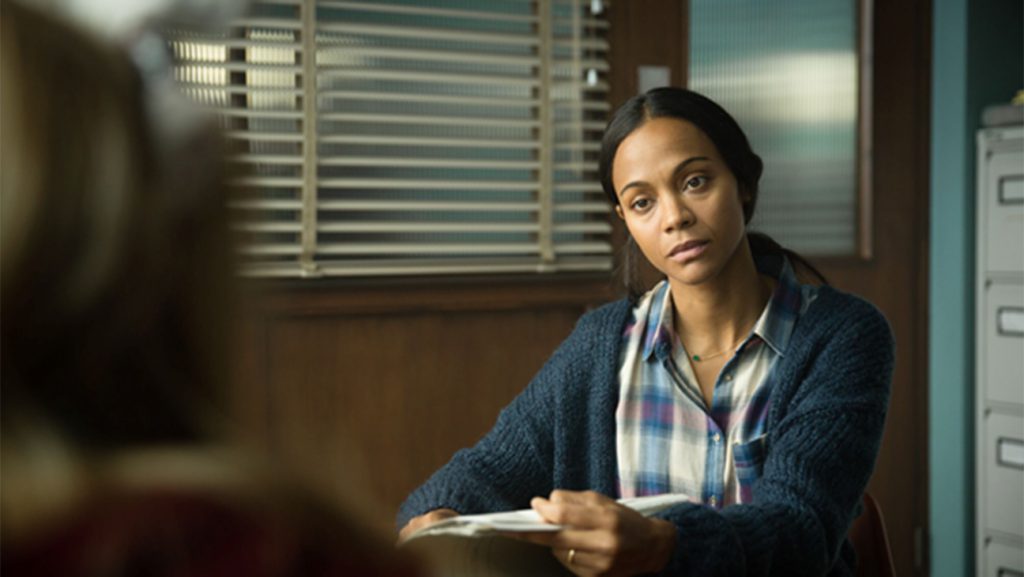 (Courtesy Of The Hollywood Reporter)

Mrs. Mollé, is portrayed as the typical concerned counselor who wants to help Barbara’s mental state. But as I said before, because of Barbara’s tough and shielded exterior she does not make it easy for Mrs. Mollé and this conflict plays out the same throughout the film. Mollé, continues to see her and Barbara always keeps her at arms length.

Let get to the Giants! First off, the Giants look pretty cool when they show up (even though it’s only a few times). The effects don’t look cheesy and the design of each one look unique and different. There are also these creatures called Harbingers, which are these creepy looking monsters that show up periodically when Barbara is feeling some sort of doubt. They taunt her and question her existence, almost as if they’re playing the voice that echoes within her thoughts. 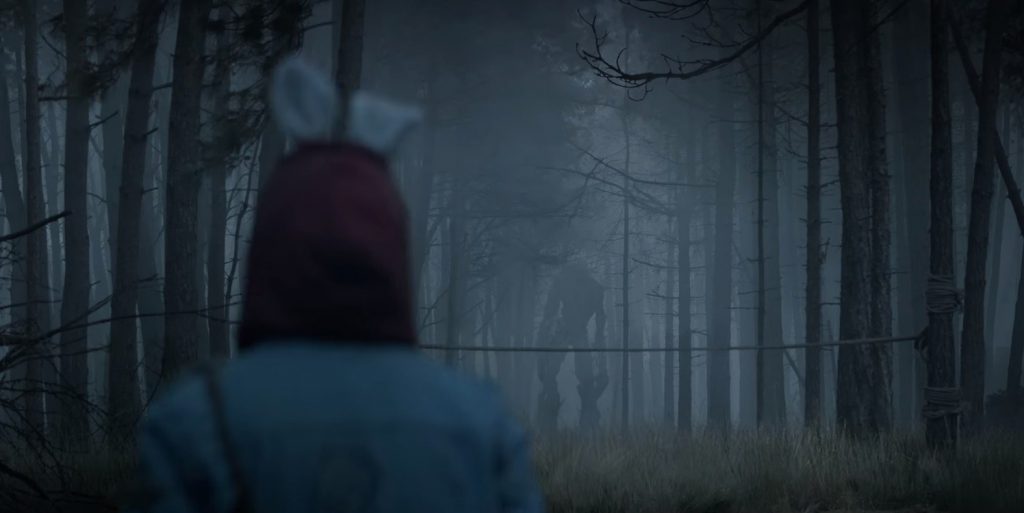 Remember, when I mentioned her Giant Killer weapon – Coveleski? Half way through the film Barbara finds out that Coveleski disappeared and this is shown when her a little bag that stores Coveleski stopped glowing red. Barbara becomes distraught and is afraid she cannot kill any Giants without it. The film only has a few instances where she actually faces Giants but I’ll only talk about the main two. She has an intense battle with a Giant at an abandoned train yard where she marked a bunch of the train carts with what look like Nordic symbols/ruins. With the Giant destroying everything in it’s path, Barbara runs from cart to cart with the Giant hot on her tail. She reveals the ruins which causes the Giant to weaken. As the Giant is trying to recover from the ruins being activated, Barbara hops into the main control room where she has connected the wires to power lines. She strikes on the power causing the train yard to catch fire which ignites the Giant – killing it.

After, the Giant dies Barbara walks away with the flames roaring behind her. Sophia, shows up as Barbara walks passed. Sophia looks at the burning train yard with no Giant in sight. At this moment, as a viewer, you start to realize that Giants aren’t real and everything is just in her head. Then the ultimate question becomes why? Struggling to find a way to get back Coveleski, Barbara plays a prank on her bully Taylor by placing a fake skeleton that’s dressed like Taylor on her locker only to reveal that the prank did not work and Coveleski is still missing. Mrs. Mollé knows that Barbara did it but when she tried confronting her, Barbara runs away.

Since, Mrs. Mollé and Sophia were unable to find Barbara after a few days they visit where she lives. They have a chat with Barbara’s sister, Karen (Imogen Poots) who is clearly distraught and beyond stressed about the situation. Karen, explains in a heartfelt manner that she’s trying her best to make things work for the kids. Mrs. Mollé finally finds Barbara and explains to her that the Giants aren’t real and that they are all in her head. Barbara disagrees with her but takes a step back when Mollé tells her that her mom really wants to see her. Barbara takes this as a false statement and storms off.

Everything comes to a crashing climax when a gigantic storm hits Rhode Island. Barbara heads to her secret shelter that she has by the beach. Everything is destroyed and an injured Sophia is left on the ground by the rubble. Sophia tells Barbara that out of revenge, Taylor destroyed everything. The storm grows stronger and stronger as the waves get higher and higher. Barbara looks out into the ocean and sees a Giant start to emerge from the water. She pushes Sophia into her hideout and climbs up a lifeguard tower. She sees the Giant again calling it the “Titan”. The Titan, now fully emerged, stands face to face with Barbara. She pulls out the now restored Coveleski, which we see now is a gigantic glowing hammer. Barbara yells at the Titan “You can’t take my mother!” She strikes the Titan with Coveleski causing it to fall back. The Titan then speaks to her – explaining that he was never after the mother but after Barbara.

He grabs Barbara and drags her into the ocean. This scene is probably one of the most cinematic scenes in the film. The Giant is sinking into the depths of the ocean as Barbara floats away from his hand. As the Giant sinks lower and lower into the depths it tells Barbara that “Everything living must die. To run from death is to reject life and that she must find joy in every moment while she can”. Barbara then regains conciousness and swims to the surface where she is greeted by Sophia.

The following day all becomes revealed. We see Barbara walk slowly up the stairs to her mother’s room, who we now know is dying. She crawls next to her mother and they share an emotional conversation where Barbara apologizes for not seeing her enough. We flash forward to see Barbara in class dressed differently and smiling. Mrs. Mollé, calls Barbara outside of class and informs her that her mother has passed. We flash forward again to the funeral where her mom is being lowered into the ground. Karen, places her arm on Barbara’s shoulder and Barbara squeezes it for comfort.

The end of the film shows Barbara staring out the window with the Titan Giant standing tall in the middle of the ocean. She softly says “Thank you” and crawls into her mothers now empty bed.

Where this movie really shines is the way the story portrays a child going through a very traumatic experience. Barbara, manifested these Giants as a way to get through a difficult time in her life. It didn’t matter if the Giants were real or not. All that mattered was that Barbara had to stop running away from the realization that her mother is going to die. All the actors did an amazing job, especially Madison Wolfe. The movie does kind of drag during the 2nd act and I really wish there were more encounters with the Giants. Even though the Giants weren’t real, it would of been amazing to see more actions scenes with Barbara fighting them off.