Loot shooters are shooter games where the player’s overarching goal is the accumulation of loot; weapons, equipment, armor, accessories and resources. To achieve this players complete tasks framed as quests, missions or campaigns and are rewarded with better weapons, gear and accessories as a result, with the qualities, attributes and perks of such gear generated randomly following certain rarity scales (also known as loot tables). The better gear allows players to take on more difficult missions with potentially more powerful rewards, forming the game’s compulsion loop

Square Enix, has been teasing their new co-op sci-fi looter-shooter since E3 2019 and for the most part, they haven’t shared a ton with the gaming community up until recently. Square Enix, has been slowly releasing gameplay videos and have allowed a handful of Youtube channels to upload some of their own exclusive gameplay. But even with that, I’m still not entirely sure what the game is about or what it’s striving to be.

So far, the developers have stated that it will be story driven, taking place on a planet called, Enoch – “a dangerous and untamed planet” and can be played either as a single player or co-op (up to three players) experience.

Seemingly, the game will use some form of a modification system, allowing you to customize your equipment to enhance your character’s abilities and stats. Outriders, falls into the footsteps of games like: The Division 2, Destiny and Anthem – which for the most part, all have the same basic RPG looter-shooter dynamics.

With a base story to keep you moving forward, loot drops to make your character feel stronger and specific class powers to take down hordes and hordes of foes.

Judging only from the handful of videos I’ve seen, Square Enix has a chance to take this genre and make it their own. I only hope they were able to take a look at this popular genre as a whole and see what some of the other games have done right, but more importantly, done wrong.

It constantly feels like there’s an ever growing trend when it comes to RPG looter-shooter games. Destiny, The Division and Anthem all have had rocky starts and it wasn’t until multiple updates later (minus Anthem) they got to where they are now.

Blizzard’s wildly popular game, Diablo 3, has nailed the looting system to near perfection in my opinion and with seasonal updates, transmog and spell rotation customization, Diablo 3 won’t be going away until 2022 when Diablo 4 is hopefully released.

When it comes to the looter-shooter genre, I can be pretty picky and multiple boxes need to be checked for me.

The character classes in Outriders need to be different enough to set each of them apart, especially when it comes to their class specific abilities. I want to feel like the character I pick is unique and different from the rest – if it makes me question who to pick for an extended period of time, A+ in my book.

I know beauty is only skin deep but any distinct look to my armor or guns will be another major box checked. I want my equipment to look different from class to class. For instance, if I’m a “Pyromancer” then it would be great if a majority of my armor would glow red or my guns have fire around it. By the looks of it, legendary weapons in Outriders will for sure have a unique design to them, but it’s unclear if it’s all or just a small selection of legendaries. 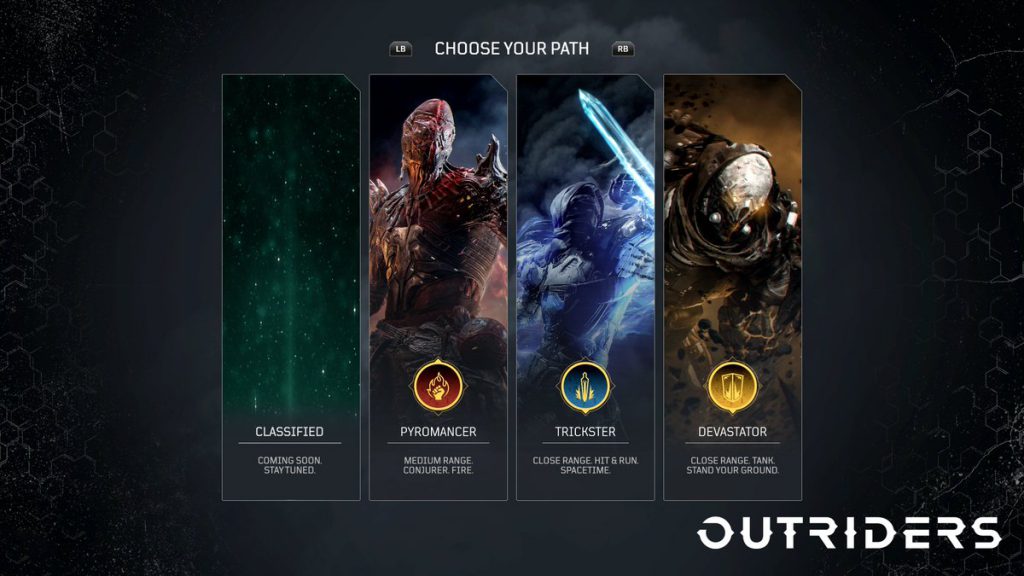 The loot would need to be balanced and rewarding with the enemies not being a constant swarm of bullet-sponges. The Division, fell into that issue until they basically reconfigured the structure of the game, making it more enjoyable.

This list could go on forever, so lastly, the endgame content. Endgame content is the one thing I think everyone can agree on. It’s all about the endgame and replay ability. Depending, on how long Square Enix thinks they can keep this game running, updates (loot, missions, quests, raids, etc) to the game will have to be full and consistent. They have already announced that Outriders will have “Expeditions”, which sounds like it will be the core endgame content for now at launch.

Focusing on just the main campaign by itself on a single class will take around 25-30 hours, but it will take 2-3 times that long if you play all the side quests, post-campaign and additional content in Outriders. We’ve made sure that there’s no right or wrong way to play the game and that you’ll always have a great experience. If you just want to complete the main campaign, you’ll experience the full story and have a great time with this game. But if you want to spend more time in the world of Outriders, getting the best items and taking on the hardest challenges in the game, it can keep you busy for exponentially longer.

If the game releases with a solid foundation at launch, it has the opportunity to be the next addicting RPG looter-shooter out there and with no micro-transactions, they’re off to a solid start. The game already has a futuristic and compelling aesthetic, so let’s hope Outriders delivers and becomes a success that can continue for years.

Square Enix, recently announced that a demo will be coming out February 25, 2021 and an official release date of April 1, 2021.